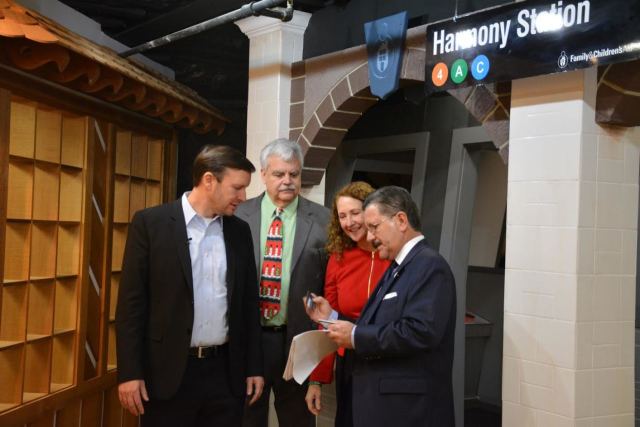 DANBURY, Conn. — When U.S. Sen. Chris Murphy wanted to push legislation he is sponsoring to overhaul the nation's mental health care system, he took his message to the people who work in the trenches.

Murphy (D-Conn.) held a Town Hall meeting on Monday at the Family & Children's Aid building on West Street in Danbury in room filled with more than 200 people — many of whom work in the field of mental health care for children.

"I'm just in awe of the toughest and most thankful work you do," Murphy said.

“It’s time that the federal government start helping you, rather than getting in the way, and we're going to push as hard as we can early next year to move this through the Congress,” he said. “I have never felt more optimistic that we will get this done.”

Murphy, who also advocates for stricter gun laws, said the mental health issue has become linked to epidemic of the mass shootings. He cited the massacre at nearby Sandy Hook Elementary School in Newtown on Dec. 14, 2012, when a lone gunman killed 20 first-graders and six educators.

“There is more support than ever because of the unconscionable pace of mass shootings since Sandy Hook,” Murphy said. “The reality, as you know, is that there is absolutely no inherent connection between mental illness and predilection to violence. People who are mentally ill are much, much, much more likely to be the victims than they are to be the perpetrators.”

But he pointed out, the Sandy Hook shooter and his family were not well-served by the mental health system.

"The need is now greater than ever," Esty told the crowd. "Sen. Murphy's Act is so needed to overhaul our mental health system, to modernize it, overhaul it, fund it, destigmatize it."

Murphy and Esty said they hope a vote will be held on the Act before the presidential elections in 2016.